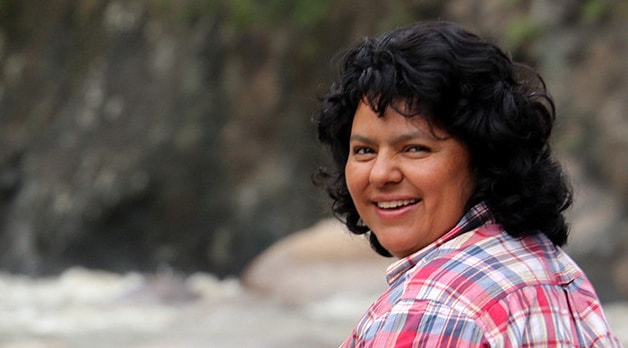 It was a tragedy waiting to happen. And it has sent shockwaves across Honduras and the world.

On March 3rd, the courageous, celebrated, beloved Indigenous leader Berta Cáceres was shot dead by gunmen who entered her home in Honduras.

Berta, winner of the 2015 Goldman Environmental Prize, had warned that she and her family were receiving death threats as she campaigned against the construction of a hydroelectric dam project called Agua Zarca, and the damaging impact it would have on the territory of the Lenca Indigenous people.

Please tell the Government of Honduras you want justice for Berta Cáceres and protection for her family, colleagues and Gustavo Castro, the sole eye-witness who survived the attack on Berta

Berta's murder has drawn international attention to the grave risk faced by human rights defenders in Honduras. Equally disturbing is the catalogue of failures by investigators in Honduras, raising serious questions about their interest in finding the killers.

If someone of Berta’s stature can be killed – with no consequence and no proper investigation – who is safe?

Yesterday, there was more shocking bloodshed as gunmen shot dead Nelson Garcia, another member of Berta’s organization, the Council of Popular and Indigenous Peoples Organizations of Honduras, COPINH. The FMO Dutch Development Bank, one of the funders of the Agua Zarca dam, has now announced that it has suspended all activities in Honduras and ceased disbursements that fund the dam. Finnfund is also suspending its support to the Agua Zarca project.

Yet Berta's family, colleagues and eye-witness Gustavo Castro remain in grave danger. They have refused to be silent. So must we.

Please raise your voice on their behalf and call for Justice for Berta.